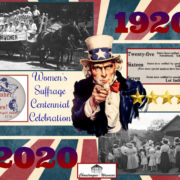 The Convention at Seneca Falls — The Beginning of the Suffrage Movement By Mary Hursh
Fort Wayne Philharmonic’s Patriotic Pops Concert has been canceled due...